How to make a succulent pillow 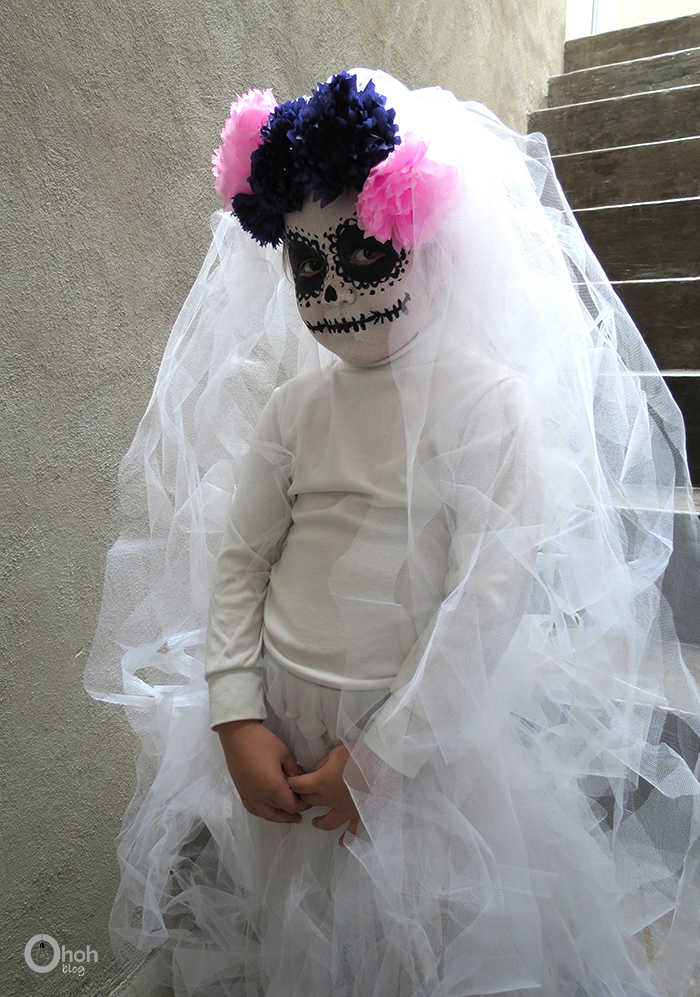 Did you have your costume ready for Halloween? The kids are very exited about it. As a lazy mom I first thought of using the same bat costume as last year, and the year before…but my kids clearly told me that was not gonna happen. Both wanted to be “tumbas y tumbas” (it’s a Mexican song, if you want to know what I’m talking about you can watch the video) I translated it in adult language by a sugar skull costume. I propose them to make a bride and groom calavera costume, they agreed, we had a deal!

For the groom costume, my son will wear the suit we bought for my brother wedding (at least he will use it a second time!). For my daughter I made an easy and no-sew bride costume with tulle. 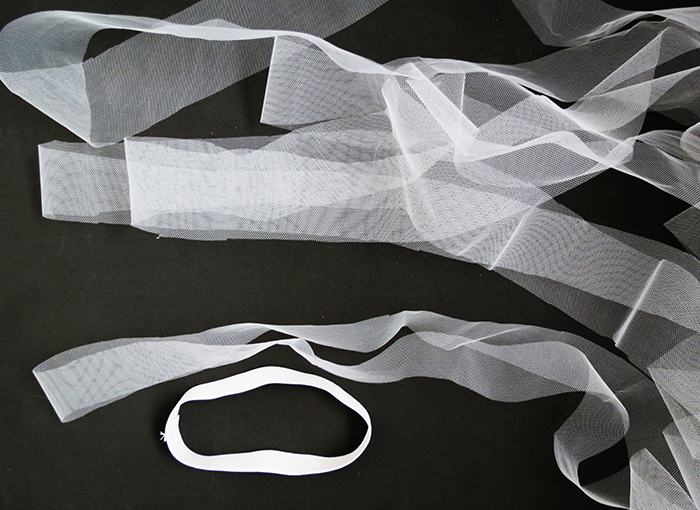 Material & tools you will need:

and to complete the costume your kid will need:

Let start by making the bridal veil. Pass the 1″ wide rubber band around your kid head and cut at the dimension. Sew ends together to make a head band. Cut 2 yard of tulle fabric into 3 inches wide straps. Fold the strap in the middle and attach them with a loop around the head band. 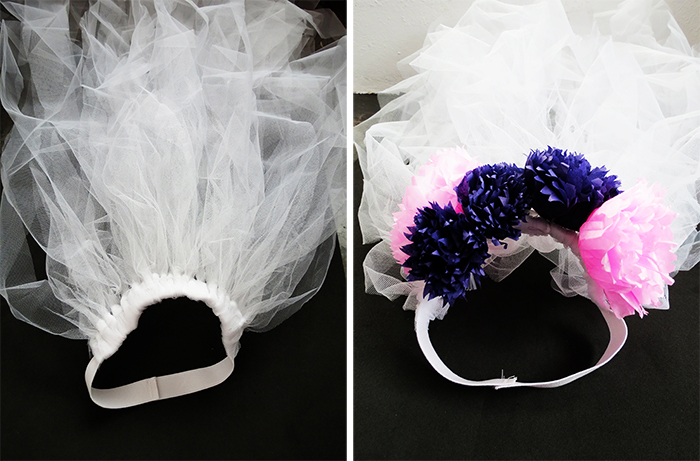 You need to have tulle on half of the head band. Then you can attach some flowers on it. You can use plastic flowers, or you can make some with paper. I used purple and pink silk paper. I made the flowers the same way as paper pompoms. You can follow this tutorial, if you want to know how. 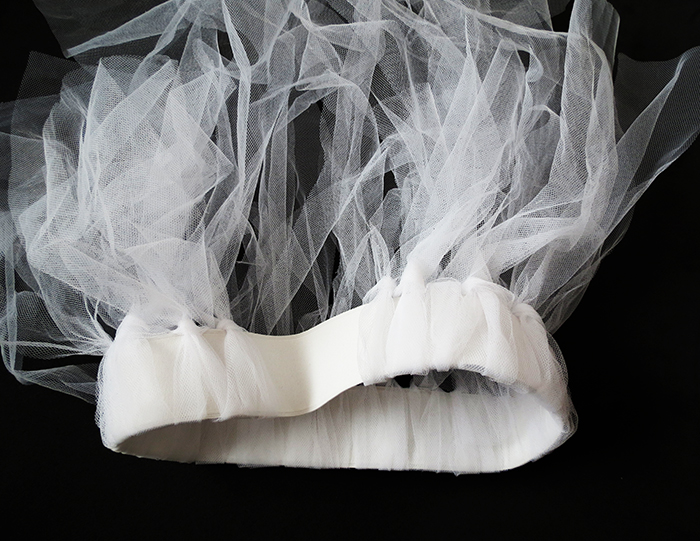 You can make the bride skirt the same was as the veil. Just take a 2″ wide rubber band, cut it at the waist dimension and sew the ends together. You will need 5 yards of tulle to complete the skirt. Cut the tulle on 3 inches strips, and attach them with a loop around the elastic. If you ever have made a tutu, it’s the same process. You can have a look at this awesome video for more explanations.

To complete the costume, your girl will need a white legging and a white shirt. For the make up, I first painted her face in white with a sponge. Then I use a paint brush and draw two circles around her eyes, and fill them with black. I paint some dots and “flower petals” around them. I draw a upside down heart on her nose. I finished by drawing a big line for the mouth and add some small vertical lines to make the teeth. And tadaaaaam!!! 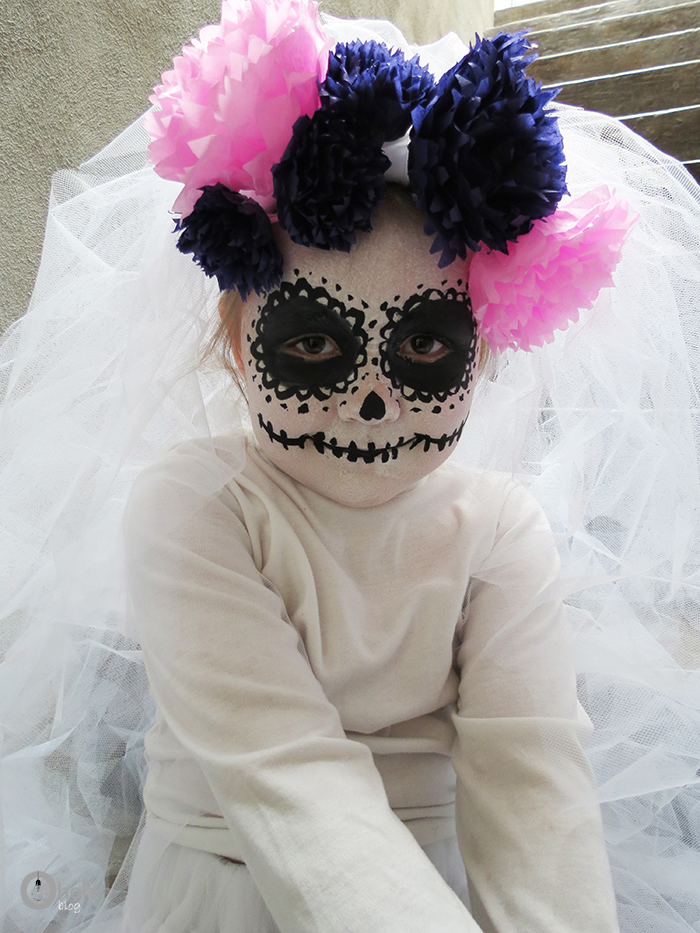 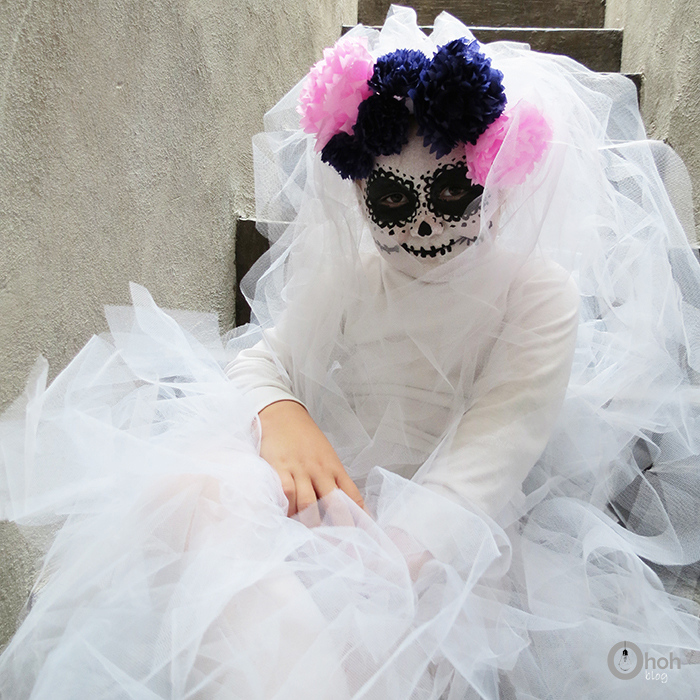 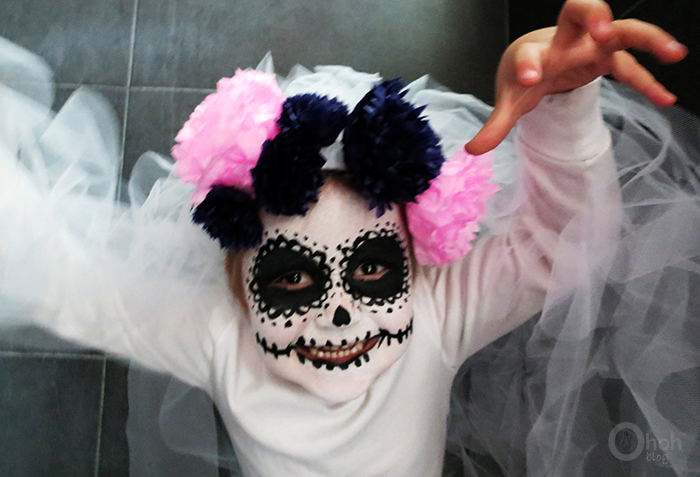 We had fun making pictures! There is no way my son will put his costume on if he is not able to go out and ask for some candy…So I will share some more pics after Halloween night! 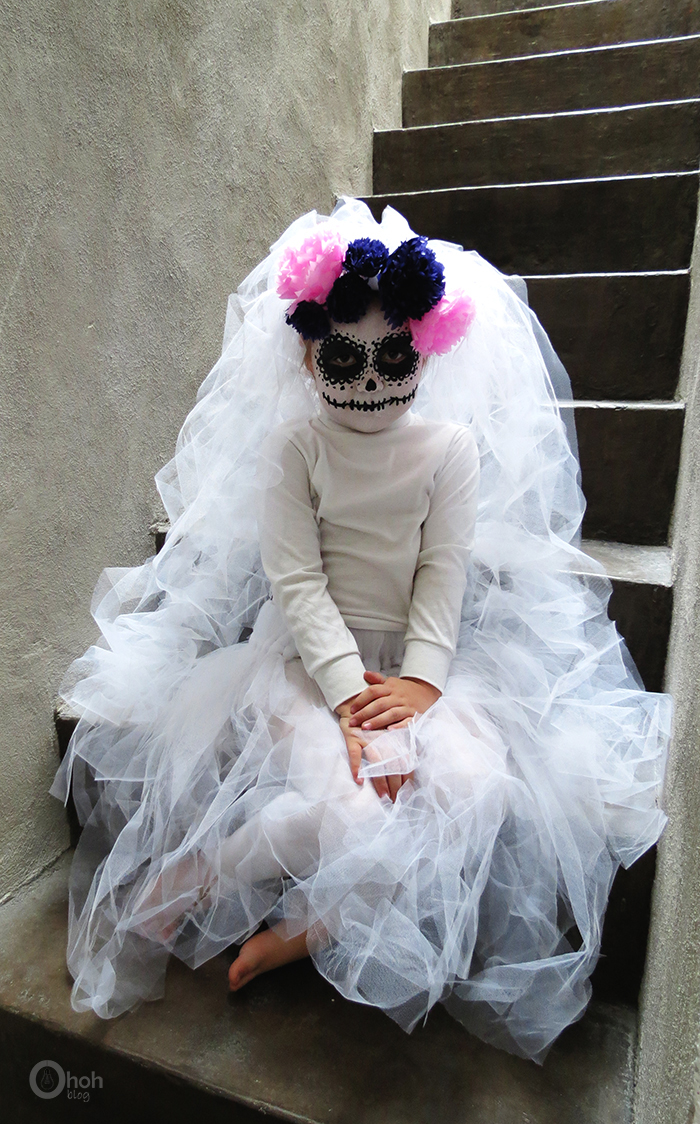 The calavera bride & groom together on Halloween day! 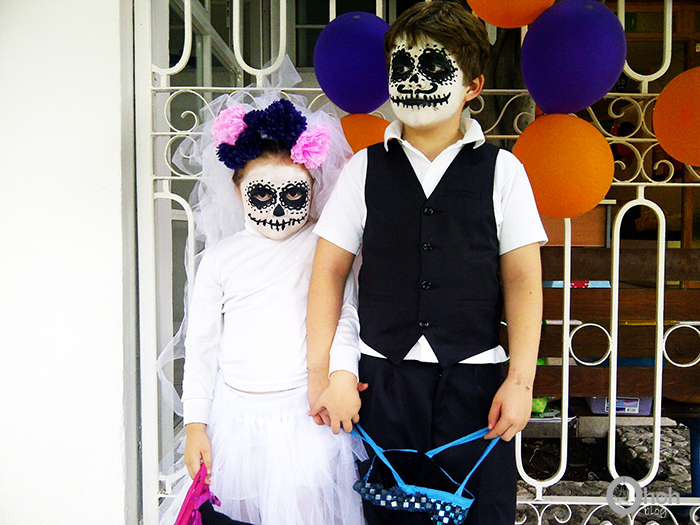 You may also enjoy:

END_OF_DOCUMENT_TOKEN_TO_BE_REPLACED

Affiliate disclosure: As an Amazon Associate I may earn commissions from qualifying purchases.

You like my work and you want to feature it? Thanks! Please use only ONE picture and link back to my post! Unless you have written permission, it’s not allowed to copy an entire tutorial.! Thank you for your understanding and respect! If you have any doubt, please e-mail me! All posts and pictures are copyrighted by A.Buffin